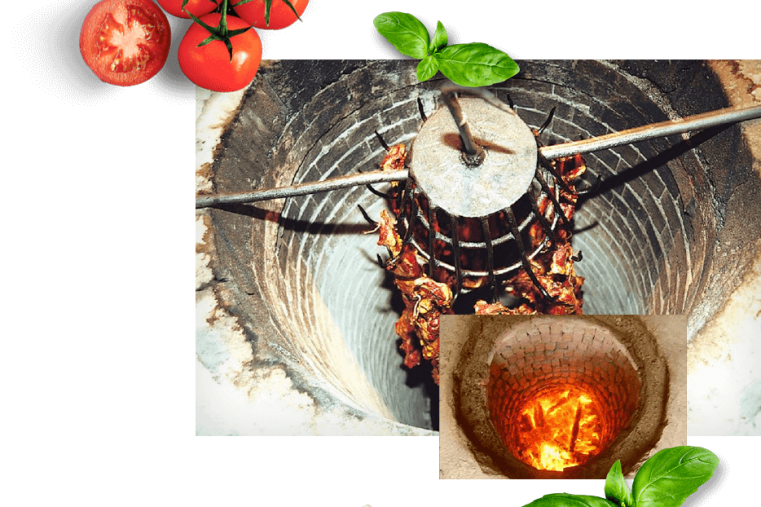 Kebab is a meat dish originating from oriental cuisine.
This word covers over twenty variants of the dish, such as:

In Europe, the word “kebab” usually means döner kebab, i.e. a dish of the Near Eastern cuisine, in particular Turkish, originating from the city of Bursa beside the Marmara Sea. The dish is made of mutton (it can also be made of veal or poultry), cut from a vertical roaster, served with a salad and ewe's milk cheese. It is common to eat kebab with ayran, a beverage made of yoghurt mixed with water and seasoned with salt.

Today, it has become fast food served with bread or in a bun with a vegetable salad and various sauces – mild or hot.
In Near Eastern countries, the word “kebab” most often refers to shish kebab, not döner kebab (in Turkish, it means roasted meat on a stick), i.e. it is kebab made of roasted, often minced, meat. Döner kebab is known as shawarma.

Büryan kebab, known for centuries in areas habited by Kurds, originates from the city of Bitlis in the east of Turkey. The tradition of kebab dates back to the Middle Ages. It is made of young billy goats or lambs bred in the mountains, and such meat is only salted. It is roasted in special ovens made of clay, in a pit in the ground where it hangs from special hooks. Such ovens are wood-fired. At the oven bottom, there is a container for collecting fat. Once the oven is heated up, wood is removed, and meat is hung up, the oven is closed with a clay-sealed metal lid. Such roasting takes about 2.5 hours. Once taken out of the oven, meat is cut as necessary and served with salads and bread.